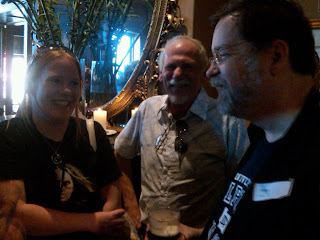 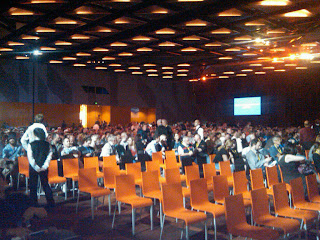 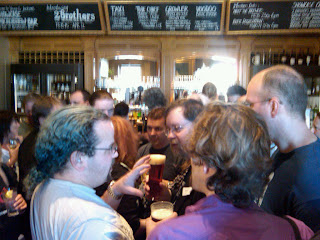 Wow! What a huge day!Last night was the first official event of the Global Atheist Convention, but our day started much earlier, at the 'Bloggers' breakfast', where we met up with a number of friends (including the always amazing Dave the Happy Singer) and were lucky enough to have PZ Myers make an appearance! (and had his first taste of vegimite off a consecrated cracker).
From the breakfast, we headed to a meeting where some big new ideas for the future of atheists in Australia... More on that later...
After lunch, it was go go go again, and we were off to the Pharyngula meetup, which was packed to such an extent that you couldn't move! Again' PZ mingled and chatted with his fans. It's great that such a celebrated person is so humble and approachable.
From there we headed over to the convention centre for the opening night, which was amazingly well attended. At this point, it became impossible to recognise that we were a part of the largest atheist event the world has seen. And its such an amazing feeling to be amongst it!
The night's speakers included David Nicholls, with an opening address; Sue-Ann Post, whose comic presentation had us in stitches; Mark Tier, who gave an informative, but poorly placed (between two comedians) talk; and Catherine Deveney, who brought the house down with her thought provoking and wonderfully funny style.
All in all, the opening night was a complete success after which, the attendees broke up into small groups of heathens intent on drying the kegs of Melbourne. We joined the Melbourne Atheists' after party and enjoyed good food, the company of friends new and old, and a steady flow of booze long into the night.