Time to have mercy on the broken of mind and spirit

Sydney Atheists Member Jason Brown has written an excellent report on our recent visit to Toongabbie Anglican.
Toongabbie Anglican: nice people, still wrong
Sydney Atheists members quietly attended a service, without causing a fuss (or even being noticed), and afterwards engaged some locals with interesting conversation. The drawcard that had caught our attention was the stated topic "Tough Questions: Does God Exist".
The one outstanding thing that came of this visit was that we heard a brand new argument for the existance of god. This is almost unheard of! It's very exciting. What is this profound truth that will have atheists converting in droves?
"The argument from inability to smell your own brain".
Not convinced? you'll have to go to Jason's Blog and read all the hilarious detail.

Magic in the Biblical World: From the Rod of Aaron to the Ring of Solomon Edited by Todd Kultz

I found this great review of a scholarly look at all the magical shenanigans in the Bible. There are a lot of divinations and wonder workings for a document that forbids magic so harshly. Joseph practices oneiromancy, the divination of dreams, and he's the hero, so its not forbidden. Moses has a wizard battle with the Pharoah's wizard's and works the same wonders as the Egyptian magicians. Jesus does some faith healing, some necromancy (raising the dead), and goes on to perform the multiplying fishes and loaves, then closes with the classic water to wine trick. Then he turns to the camera and says "all that I have done, you shall do, and more!". There are many schools of Jewish and Christian Occultism such as the Rosicrucians.
The five page article is here:  FindArticles - Magic and the Bible reconsidered Judaism, Summer-Fall, 2005, by Alex Jassen
Here's a nice passage that sums things up:
"Deuteronomy 18:9-14, with its outright condemnation of magic, divination, and necromancy, often serves as the starting point for the study of magic in the Hebrew Bible and in later Judaism and Christianity. The Deuteronomic prohibition of magic and all associated phenomena, however, does not attempt to define any of these magical acts. Later biblical texts are equally inconsistent in their understanding of what exactly falls under the rubric of Deuteronomy's prohibited magic. For example, 1 Samuel 28 narrates how Saul solicits the aid of a necromancer in order to consult the now dead Samuel. In presenting the actions of the necromancer, the text clearly identifies her behavior as a flagrant violation of the Deuteronomic strictures. At the same time, the stories of Elijah and Elisha are replete with examples of many wondrous deeds that could easily be classified as magical phenomena. For example, Elijah and Elisha raise people from the dead (1 Kings 17:17-24; cf. 2 Kings 13:20-21), foretell the future through the use of signs (2 Kings 13:14-19), and perform other supernatural acts (1 Kings 17:7-16). Never, however, are Elijah and Elisha condemned as soothsayers nor is their behavior classified as a violation of Deuteronomy."
...
"D. Marguerat's study on "Magic and Miracle in the Acts of the Apostles" demonstrates how Luke (the putative author of Acts) was very aware of the sociologically dictated distinction between magic and miracle. In the Roman world, Marguerat observes, supernatural healing was often viewed as magical phenomena. Seeking to ensure that his audience recognizes apostolic healing as a divinely inspired miracle, Luke carefully structures healing narratives such that any confusion is quickly dissolved by the clarifying apostolic word. This stands in contrast to the apostolic opponents who are consistently identified as magicians (see Acts 8:9-13, 18-24; 13:6-12)."


“We are going to die and that makes us the lucky one. Most people are never going to die because they are never going to be born. The potential people who could have been here in my place but who will in fact never see the light of day outnumber the sand grains of Arabia.”
Narelle Jarrett of Sydney Anglicans used some interesting logic recently to try and suggest to us that not only is there a god but that the life of Atheist is a wasted life spent worrying about death. I personally prefer to quote the likes of Richard Dawkins from Unweaving the Rainbow above as a way of encapsulating my position, or perhaps even the late great Epicurus from his Letter to Menoeceus:
“Death, therefore, the most awful of evils, is nothing to us, seeing that, when we are, death is not come, and, when death is come, we are not.”
It does not bother me to quote genuine intellectuals in my response as opposed to Jarrett’s Eric Idle and Woody Allen, I only hope that the Sydney Anglicans are aware of who Richard Dawkins and Epicurus are before they judge us. I wish no longer to dwell upon death however because it is of such little concern of me, instead I will focus on the life affirming activities of the Sydney Atheist community that I am part of.
This past weekend Sydney Atheists gave blood, spent the afternoon in the Domain enjoying the Sydney Festival First Night and heard a fantastic talk in the pub of the great success the NoToPope coalition was. All was done with a fantastic group of people that went from the eight that donated blood to the thirty that came along to our talk on Sunday afternoon. At no point in the packed weekend of Sydney Atheists did the topic of death arise; we were way too busy focussing on the enjoyment of the life that we have now to concern ourselves with issues that we have neither control over nor knowledge of.
I must apologise again for invoking an intellectual heavy-weight in my argument but it is difficult not to when the side of Atheism contains a glut of such resources. Victor Stenger in his mind blowing God: The Failed Hypothesis effectively demonstrates how the universe exists beautifully by itself and indeed the comforting words of John:
“In the beginning was the Word, and the Word was with God, and the Word was God. He was with God in the beginning.”
As quoted by Jarrett come up short when explaining the truly amazing nature of the universe in which we live. The reality is that beyond the reality that there is no evidence for such a creator, such a creator certainly wouldn’t make the universe any more special than the ant farm you toyed with for a week before getting bored with as a kid.
I also take exception with Jarrett’s statement that she found she:
“was impressed by the integrity of these Christians, by their honesty and transparency. They didn’t think they came by chance from nothing, or that they were going to nothing.”
Beyond the basic error of this egregious non sequitur I can’t tell if I therefore lack the honesty and transparency of a Christian. I would challenge Jarrett to put questions to the Sydney Atheist community or myself, we have nothing to hide and will prove to you that the link between honesty and transparency and believing in going somewhere when one dies is not merely tenuous but non-existent.
Finally I want to dispel a myth that is often held about Atheism:
“Atheism a worry free life - even for an optimist, that’s a myth.”
No Atheist would think being so leads to a “worry free” life. Any Atheist still has the same problems to face in the world as any Christian; money, war, disease and famine all concern Atheists deeply. Money, war, disease and famine possibly even concern Atheists more because we don’t believe we have a second chance at this life. Despite this Atheists don’t act on something because they don’t believe in God; Atheism is not a philosophy. Atheism is the absence of a belief in a god. Atheists - those who do not have a belief in a god – take their philosophies from Humanism or other schools of thought but we do not act out of the absence of our belief in a god; we act because of our concern and love of other human beings. The top two philanthropists in the world; Bill Gates and Warren Buffett both happen to be Atheists but that does not imply a link between Atheism and charity anymore than there is a link between religion and charity. Bill Gates and Warren Buffett act because they care about the fate of other people, and that is a human nature not a religious or secular one.
To finish I again want to extend an invitation to Narelle Jarrett to join Sydney Atheists at one of our meetings before again publishing such unreferenced rubbish. We meet several times each month and are always open to newcomers.
Originally posted by Tynan Bryant
No comments:

He went extinct for your sins 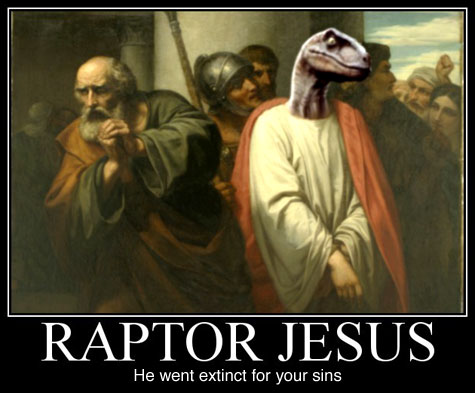 Presented by Dave the Happy Singer, produced by Jason Brown, with technical support from Ian Woolf.