Journalist Kieran Adair of City Hub spend the entire day on the bus to report on the Chaplaincy and Census campaign. Read also the interview with Fleur and Andrew inside. The Big Red Bus stops at Kirribilli to deliver our petition against the $440 million National School Chaplaincy Program of providing unqualified Christians to every State school instead of spending the money on qualified school psychologists or medical research, which is being cut by $400 million to save costs Apple of knowledge or jelly serpent? “There is every cause for angst if people give up on God.”, Bishop Anthony Fisher declared last Easter, receiving support from Archbishop Peter Jensen and Cardinal George Pell. On Palm Sunday, April 17, Sydney Atheists will respond with their first ever bus campaign with the motto "No God? No Worries."

Inspired by similar campaigns in Europe and the UK, an original red double-decker bus bearing the motto "No God? No Worries" will be cruising the streets of Sydney, meeting congregations at St Marys and St Andrews as well as delivering a petition to the Prime Minister at Kirribilli House.
Apart from the simple message that it is possible to be "Good without God", we prepared a petition that the Chaplaincy in Schools program not be misused for religious recruiting. Furthermore, we ask Australians who are not religious, to actually mark "No religion" at the upcoming census.
Join us on our tour through Sydney to support Atheism as a completely normal point of view. Something you shouldn't worry about. The bus will depart at 10am from Humanist House, Chippendale. The seats on the bus have been allocated, but you are invited to join us at one of our stops in Sydney's CBD. The "No God? No Worries" bus route includes stops at St Marys Cathedral (11:30am), Kirribilli House (12:45pm) and St Andrews/Town Hall Square (2:45pm).
And in case that you unfortunately cannot make it altogether, but want to support us anyway, there is always a way to donate. The easiest way to donate to Sydney Atheists is through PayPal's secure servers.
Alternatively, you can make a deposit directly to the Sydney Atheists St George Bank account: BSB 112-879 account no. 410 136 189.

TO THE HONOURABLE SPEAKER AND MEMBERS OF THE HOUSE OF REPRESENTATIVES

This petition of certain concerned citizens of Australia draws to the attention of the House the discriminatory character of the National School Chaplaincy Program which was introduced by the Coalition Government and extended by present Prime Minister.
Rather than being a resource for children to call on when in need, it has allowed unqualified persons, who would not normally be granted access to schools, to promote religious programs against the wishes of many parents. In our diverse and multi-cultural society, with many religions and belief systems, it is the government's moral and ethical responsibility to maintain the separation of Church and State - especially in our public schools - to ensure a cohesive community where one interest group is not privileged over any other.
We therefore ask the House to ensure that only persons qualified in social work, counselling or psychology at a recognised tertiary institution in Australia - regardless of their or their institutions religious views - be permitted to provide genuine support for our children under the Chaplaincy program.

If you want to support this petition, please download the form, print it and have friends and family sign it. The parliament wants it on paper. Please return it at the next meetup, or at the Big Day Out, our bus campaign. Or send it to Sydney Atheists, PO Box K784, Haymarket, NSW 1240.

Facts About The Census

Facts About The Census

No God? No Worries. Having no religion shouldn’t be an issue. Nothing you’d worry about. After all, it’s just people who live and love their life - just like you - and who happen not to have religious beliefs. Some more outspoken, surely, others simply not that interested. No Worries? It should be obvious, but unfortunately, Sydney’s top clerics want you to believe otherwise. Here is what Anthony Fisher, Bishop of Paramatta said last Easter:


The century of Hitler, Stalin and Pol Pot, the era of mass murder, mass abortion and mass breakdown of relationships, this century of state-imposed or culture-supported atheism, has shown there is every cause for angst if people give up on God.

Totalitarian rule in the 20th century was devastating. But Fisher's statement is misleading and dishonest. For one, the most notorious dictator, Hitler, a self-described Catholic, endorsed religion as foundation of society, claimed publicly to do Gods work, banned free-thinking organisations, persecuted their leaders, while German soldiers wore the inscription ''God with us''. In return, Catholic bishops called to support the regime, took an oath of loyalty, and rung the bells to celebrate a failed assassination. Surely, Hitler's ideology was racist, not religious, informed by an unholy mix of social Darwinism, nationalism, and centuries of church sanctioned anti-Semitism. Fisher might have also forgotten Catholic support for totalitarian regimes, like Franco's Spain, or for their members, like Pinochet.
Totalitarian rule of the 20th century shows what happens if critical thought and free speech is given up in favour of dogma and ideology. Fisher's statement is not only demeaning to atheists who fought totalitarianism. Many courageous religious people, of all denominations, Catholics included, stood up and defended the rights and freedoms of others.
George Santayana famously warned "The one who does not remember history is bound to live through it again."

Anthony Fisher was not alone in villifying Atheists in his Easter sermon last year. Here is what George Pell, Catholic bishop of Sydney had to say:

The many excellent government agencies are religiously neutral, secular and not anti-God, paid for largely by the taxes of the Christian majority. We thank God for them too. But we find no community services sponsored by the atheists.

26% of Australians are Catholics, 19% Anglicans, and 19% have no religion, according to the 2006 census. They all pay taxes, it is not a religious priviledge.
Quite the opposite, actually. Religious organisations in Australia are tax-exempt. Not just activities that benefit the community, fight poverty, and promote education - which we support - but also activities that promote religion, or are ordinary business. As atheists we would love not to subsidise the Catholic Church to manage their 100bn worth of wealth. We would rather give our taxes to one of the many secular charities that we already donate to. Like Amnesty International, Doctors without Border, the Red Cross, or Oxfam.

The Anglicans could not let the Catholics have the playing field to themselves. Here is what Anglican Peter Jensen inculded in his Easter message last year:

As we can see by the sheer passion and virulence of the atheist - they seem to hate the Christian God - we are not dealing here with cool philosophy up against faith without a brain. 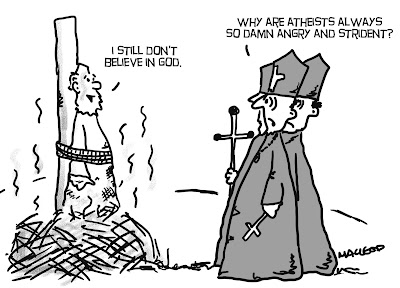 Atheism is disbelief in gods, and reasons are plenty. Like the fact that religious claims are unproven, absurd, contradictory or vacuous. As such, it is cool philosophy.
Atheists, however, are passionate people. They get passionate when a bishop protects a child abuser. When a religious school suspends a student for being gay. When Christian lobbyists deny children of non-religious parents an alternative to scripture class.
Atheists get passionate when civil liberties get undermined for a tax-payer subsidised religious youth event. When religions demand the right to discriminate women, gays, and people of other or no faith. When they oppress women. When religions ask not to be criticised because of their religion. We are passionate, because rather than caring for a god, who might not exist, we care for humans, who do.

If You’re Not Religious For God’s Sake Say So

If You’re Not Religious
For God’s Sake
Say So

Sydney Atheists in response to the erroneous reporting on the Catholic Website, www.sydneycatholic.org, wish to advise the following:


The counter protest was initiated by Laura, who personally opposed the continued harassment of vulnerable women and the workers of the PreTerm Women's Clinic. Laura herself is not an Atheist, and not a member of Sydney Atheists. Laura was offered advice and support from Sydney Atheists. Because of a mutual interest in human rights, Sydney Atheists applied for a permit. With the permit granted, Laura has continued to organise the protest, and the protest now includes some members of Sydney Atheists.

Sydney Atheists' position on the matter of abortion and religious organisations picketing women's health clinics is as follows:


Whether to have a pregnancy terminated or not is a personal matter for a woman. A woman should be able to decide this without judgement, condemnation or undue influence in either direction. We strongly support the ideal that a woman faced with this decision should receive professional and impartial counselling from qualified medical and mental health practitioners. We condemn the use of emotional and psychological bullying used by religious organisations to influence these personal matters.


Originally posted by ansgar
No comments: