On Saturday the 22nd of February we will host a very special function.
Originally it was supposed to include Edwina Rogers, the Executive Director of the Secular Coalition for America. As of the 21st of January she has had to pull out of the conference due to circumstances beyond her control. Whilst it is disappointing that we will miss her American perspective, the organising committee of this conference have decided to go ahead, given the importance of issues arising in Australian government and education.
Our guests will include:
Professor Marion Maddox author of "God under Howard: The rise of the Religious Right in Australian Politics" and "For God and Country: Religious Dynamics in Australia's Parliament". Professor Maddox's books will be available for purchase at the event.
Lyn Allison who was an Australian Democrats Senator from 1996 to 2008. This included a period as leader of the Democrats from 2004 until 2008. Lyn is an atheist.
Lara Wood who is the Campaign Coordinator for the parent body Fairness In Religion In Schools FIRIS, a Victorian body that aims to see the withdrawal of scripture from state schools. http://religionsinschool.com/
Cathy Byrne is a Post-Doctoral Research Fellow at Macquarie University with an interest in religious intrusion into State schools.
This event is co-hosted by Sydney Atheists and the Secular Coalition of Australia - which we are a member of - , a coalition of Atheist, Rationalist, Humanist, Skeptic and other - even potentially religious - interested parties. It is sheer coincidence that we will have a talk by Teresa Russel from Primary Ethics http://www.meetup.com/sydneyatheists/events/154062482/ the preceding week, however these two functions will complement one another, particularly considering recent Federal Government announcements on educational reviews.
The event on the 22nd of February will be a ticketed one with an admittance fee of $45. The admittance fee covers attendance at the meeting as well as a main course lunch, however does not cover other food or drinks. To purchase a ticket, please go to: http://www.trybooking.com/EDQK  The event will be held on the First Floor of Strattons Hotel, 249 Castlereagh Street Sydney.
The event and topics will proceed as follows:
10.30 - 11.00am Registration period
(1) 11.00 - 12.30 Secularism in Australia Marion and Cathy
Lunch 12.30 to 1.30pm
(2) 1.30 - 3.00pm A background briefing on religious incursion into the State school systems in Australia by people such as chaplains, evangelists and scripture teachers. Marion, Cathy and Lara
Break 3.00 - 3.15
(3) 3.15 - 5.00pm Lobbying, systems, methods, tools of the trade and related issues. Lyn Allison with the assistance of a panel will discuss this topic
5.00 - 5.15 Break
(4) 5.15 - 6.00pm Open forum
6.00pm and on: Dinner for those wishing to stay and interact with other guests and speakers, network with others or simply have a relaxing meal with drinks.
There will be people other than Sydney Atheists in attendance.
Please pay for your ticket prior to placing your RSVP on the website:
http://www.meetup.com/sydneyatheists/events/161265172/

"Teresa will discuss the work of Primary Ethics, the charity founded three years ago by the St James Ethics Centre. Primary Ethics creates curriculum for public primary school students whose parents want them to study ethics rather than scripture classes available in their primary schools. Teresa will discuss the curriculum as well as the recruiting, vetting and training of volunteers for ethics classes. She will give an update on the progress of this vital addition to the education of young children in NSW." -

Greeting fellow Sydney Atheists. I am pleased to be giving a talk about – of all things – the actual meaning of life!

For the religionist and faith adherent, the meaning of life must be supplied, inspired, defined, grounded in, and sustained by an external supernatural force, spirit, and/or deity or deities of some kind. The meaning of life begins and ends with doctrinal and faith commitments. Unlike theologians, professional (and aspiring) philosophers often venture no answer, opinion, or solution regarding the meaning of life. In philosophy, the question of the meaning of life is often treated as something of an in joke: “They’re going to answer what!? Oh well we can all go home then”. It is arguable that no philosopher will ever do better than author Douglas Adams, whose characters Loonquawl and Phouchg (Adams frequently righteously lampooned philosophers) and mega computer Deep Thought parlay about the question in The Hitchhiker’s Guide to The Galaxy:

“But it was the Great Question! The Ultimate Question of Life, the Universe and Everything!” howled Loonquawl.

“Yes,” said Deep Thought with the air of one who suffers fools gladly, “but what actually is it?”

A slow stupefied silence crept over the men as they stared at the computer and then at each other.

“Well, you know, it’s just Everything… Everything…” offered Phouchg weakly.

“Exactly!” said Deep Thought. “So once you do know what the question actually is, you’ll know what the answer means.” (The Hitch Hiker’s Guide to the Galaxy Chapter 34, Page 32)”

I look forward to exploring the topic with you on the 14th February.

We do request at a minimum a two dollar donation to cover various other costs. We are not for profit and 100% of funds will go to operating the group as well as promoting Atheism. Also, as the hotel is doing us a very good deal for the space, we hope that you will avail yourself of some of the fine food and beverage that they offer.

The dinner and talks will both be at the one venue, First Floor Strattons Hotel, 249 Castlereagh Street Sydney. Dinner will be available from 6.00pm whilst the talks will begin at 7.00pm.

You will be able to eat before or during the talks. We will also have a 15 minute intermission. This venue affords us much in the way of social possibilities as well as the talks. Please note that catering will not be available after 8.30pm. Meals are available from $10.00.Location:

In 2009, Tony Abbott called for all school children to have mandatory classes teaching the bible and Christianity to children.

"I think everyone should have some familiarity with the great texts that are at the core of our civilisation," Mr Abbott said. "That includes, most importantly, the Bible.

"I think it would be impossible to have a good general education without at least some serious familiarity with the Bible and with the teachings of Christianity."

Christopher Pyne has recently called for reforms to the national school curriculum, appointing staunch critics of the curriculum. Dr Donnelly, a former chief of staff to Liberal frontbencher Kevin Andrews, has criticised the ''cultural-left nature'' of the education establishment, while Professor Wiltshire has called the curriculum a ''failure''. Donnelly was previously employed by tobacco firm Phillip Morris to design a school program teaching children about peer pressure and decision making that did not discuss the health dangers of smoking.

While Pyne has stated that he wants to weed out "partisan bias" from the curriculum, the ACT Education Minister Joy Burch has questioned the "independence and rigour" of the review, warning  "you could see political bias [becoming] an influence in the Australian curriculum''.

Sydney Atheists is strongly concerned at the history of groups like Access Ministries proselytising against government regulations. While general religious education can help students in a multicultural world understand the perspectives and beliefs held by Australians, it must be in line with world standards like the Quebec curriculum, and not allow the indoctrination of children in public schools.
No comments:

In August 2013, a church group called Zion Praise Harvest held several lectures in Perth by young earth creationist, John Mackay. This included a few lectures in churches, as well as one at Curtin University and one at the University of Western Australia. Entitled “Exposing Evolution, Confirming Creation”, the lecture at UWA had no substance and presented no evidence. 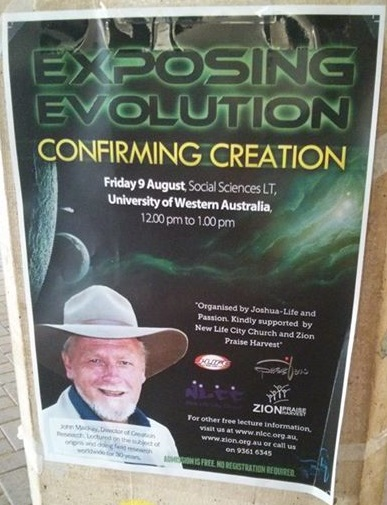 The lecture was essentially a collection of straw man arguments against examples of evolution that one might find in a high school biology textbook: peppered moths, finches, etc. This attack on science was punctuated by absurd tangents, such as calling former Prime Minister Julia Gillard a “rank atheist feminist”.

After the lecture many of the attendees stayed for a BBQ and to talk to John Mackay. He made various homophobic comments, including using homosexuality as his go-to example of “immorality” in modern society. In a conversation about the Bible after the lecture, a student pointed out that the Bible condones rape in the following passage from Numbers 31:

Mackay argued that this is not rape, because the girls were forced to enter a “legitimate Jewish marriage” first (after having their family murdered by their soon-to-be husbands), and obviously you can’t rape your own wife. Not only is it not rape, but Mackay believes this is apparently not even immoral for God to command this and for the Israelites to carry it out.

After the event, Mackay wrote an expanded answer on the 32,000 Midianite virgins captured as the spoils of war by the Israelite army, arguing that forcing women into marriages in which they are raped is moral, because rape inside marriage used not to be illegal, or considered wrong.

Mackay sincerely believes that even today, rape within marriage is a contradiction, and that forced marriage can be legitimate. The idea that rape is wrong is apparently a recent secular invention. Mackay claims that atheists have no moral opposition to rape, despite the claim being soundly refuted in 1997.


“The modern atheist mind wants to use modern their [sic] definition of rape as an absolute, such that a woman both before and after marriage is an autonomous being who has rights to resist any man including the man she married, and if he insists on sex, then that is rape and the male is legally guilty of a crime.”

Mackay has sidestepped one of the most egregious issues of Numbers 31, not just that the virgins were raped, but they were treated as chattel property in the same class as livestock. Consider the surrounding text in the myth:

Moses then commands the slaughter of every woman that has ever had sex, presumably using the highly scientific methods that were available at the time. Yahweh then specifies how the "plunder" of captive women are to be divvied up, including 32 for his temple. The bible then gives numbers for how many thousands of sheep, cattle, donkeys, and virgin girls the Israelites plundered:

The treatment of the Midianites is just one of examples of brutal killings and barbarity in the Old Testament that hicks like William Lane Craig and Mackay defend as absolutely good, while simultaneously railing against the imaginary harm in tolerance of same-sex relationships. 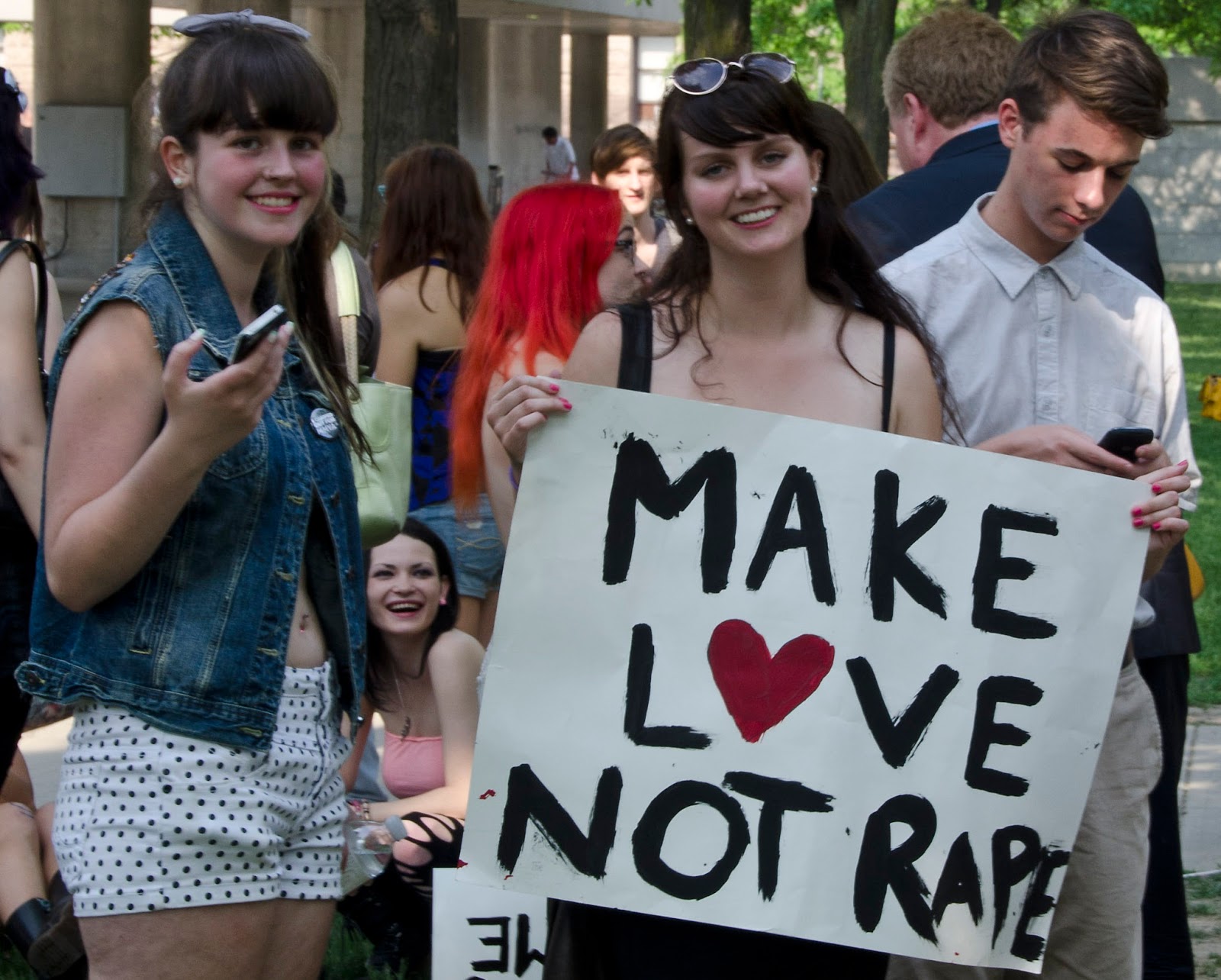 Via the UWA Atheist and Skeptic Society

Jalyn Neysmith, an education ranger at Centennial Park has contacted us regarding an event next Friday, January 10th. They will be hosting an All Girls Science Day, a science holiday camp just for girls aged 8-13. They are running the camp to draw attention to, and combat, the low levels of enrollment Australia is seeing for women in science.Science holiday camps are a great, low-pressure way to engage girls with science, but most coed camps are dominated by boys. Being in such a minority makes it less fun for girls, and gives them the impression that science is just for boys. All Girls Science Day will provide girls with an all-female environment where they'll do fun experiments and activities in a wide variety of science subjects including zoology, psychology, physics, and botany. The day is led by female instructors, and will include a visit by a female scientist. This year their guest lady of the lab is Dr. Tanya Latty, who researches the behaviour and swarm intelligence of social insects like ants, bees, and the wonderful slime mould, and has had her research featured in National Geographic and BBC Nature among others. She's a fantastic and enthusiastic roll model for young girls.More information on the camp can be found on the website or feel free to contact Jalyn for more details through: Mobile 0498 466 781 or Email jalyn.neysmith@cp.nsw.gov.au
No comments: