Some fact-based articles on vaccine-preventable diseases and how vaccine denialists are helping them spread:

The High Court has upheld a challenge to the National School Chaplaincy Program, ruling the law used to maintain Commonwealth funding for chaplains is unconstitutional.

Despite the court challenge, the program was allocated nearly $250 million in this year's federal budget, to be spent over four years.

As Ann Twomey noted after the first constitutional challenge, "This Bill, in a bald-faced manner, rejects the fundamental propositions put by the High Court in the Williams case. The Commonwealth is clearly asking for another clobbering by the Court."

The High Court summed up their decision in a statement reading

The Court held that, in their operation with respect to the challenged funding agreement and the challenged payments made under that agreement, none of the challenged provisions is a valid law of the Commonwealth. The provisions are not, in their relevant operation, supported by a head of legislative power under the Constitution. Providing at a school the services of a chaplain or welfare worker for the objective described in the FMA Regulations is not a provision of "benefits to students" within the meaning of s 51(xxiiiA) of the Constitution. The Court further held that the Commonwealth's entry into, and expenditure of money under, the funding agreement was not supported by the executive power of the Commonwealth. The making of the payments was therefore held to be unlawful.

The High Court decision found that the "expenditure of monies under, the SUQ Funding Agreement" was not supported by the executive power of the Commonwealth.

It's time to tell your MPs and Senators to end the National School Chplaincy Program for good, and to give funding to the states to run their own counselling programs though their education budgets.
No comments:

It's time to end the National School Chaplaincy Program

The National School Chaplaincy Program was quickly hatched as a pork barrel to conservative Christians by John Howard in 2006. The program has been controversial since its inception, with teachers, counsellors and psychologists opposed to poorly qualified chaplains having access to vulnerable young students.

Shortly before the 2010 election, Julia Gillard pledged to Jim Wallace that the NSCP would continue its "unique flavour though its link to the Christian faith." In 2011, 96.5% of school chaplains were Chrisitan, while only 61.1% of the population marked "Christian" in the census that year.

Peter Garrett has admitted that the NSCP had problems with evangelism, requiring "significant guideline changes" to protect children from "churches with their mission to evangelise." Garrett stated "the line between chaplains acting to support students in the provision of general pastoral care and proselytising was too easily crossed."

The Australian Education Union has criticised the fact that 100,000 students with disabilities do not get the financial support they need, while funding for exclusively religious chaplains is prioritised. The Australian Psychological Society slammed the NSCP funding decision as "appalling." A spokesman stated "There are no reasonable standards of quality of training for people who take on essentially counselling roles in the school situation."

Today, the Black Dog Institute and Mission Australia released a report finding that one in five young people struggle with a mental illness, but few seek help. With studies finding that poorly qualified counsellors can give harmful advice, the government desperately needs to invest more money in supporting the mental health of young Australians with qualified mental health professionals, not enthusiastic missionaries.

Already 189,000 Australians have signed a petition calling on the government to cut funding to anti-gay chaplains. Senator Louise Pratt has outlined the problems with chaplaincy that have been aired by current and former school students:

My best friend was getting bullied by other students last year for being gay, so went to speak to our school chaplain about it. ... He suffers from anxiety and depression, has attempted suicide in the past and occasionally self-harms. He spoke to our chaplain about being bullied and about how he has begun to believe what people are saying about him being a 'fag' and 'a disgusting, gay idiot'. ... The chaplain told him that his bullies were right and that homosexuality is a degrading sin that sends people to hell. .... That night I got a phone call from his Mum telling me he had tried to overdose on medicine pills and was in hospital having his stomach pumped.

And here is another:
... this term the Chaplain warned us against ... non-marital sex. When I asked him about what a lesbian couple of faith would do if they couldn't get married, he simply replied that gay and lesbian people could never be proper Christians. … He went on to talk about how ... gays and lesbians were ... unnatural, indecent and perverse. ... this event made me feel as if my sexuality was something to be ashamed of. I consider myself a strong person, and for this to affect me so deeply made me realise the dangers of mixing religion with public education.


Polls have found that only 5% of Australians want the government to remove secular welfare workers from the scheme. In 2012, the the High Court found that funding arrangements with Scripture Union Queensland were beyond the executive power of the Commonwealth. Legislation was quickly rushed though the parliament in order to bypass the court's decision.

The High Court will hand down a new decision on the legality of the funding arrangements tomorrow.

Sydney Atheists calls on the government to scrap the National School Chaplaincy Program, and to properly support children with disabilities, and fund qualified mental health professionals to give professional help to vulnerable young students.

We urge our members to contact their NSW representatives with any concerns about the program. 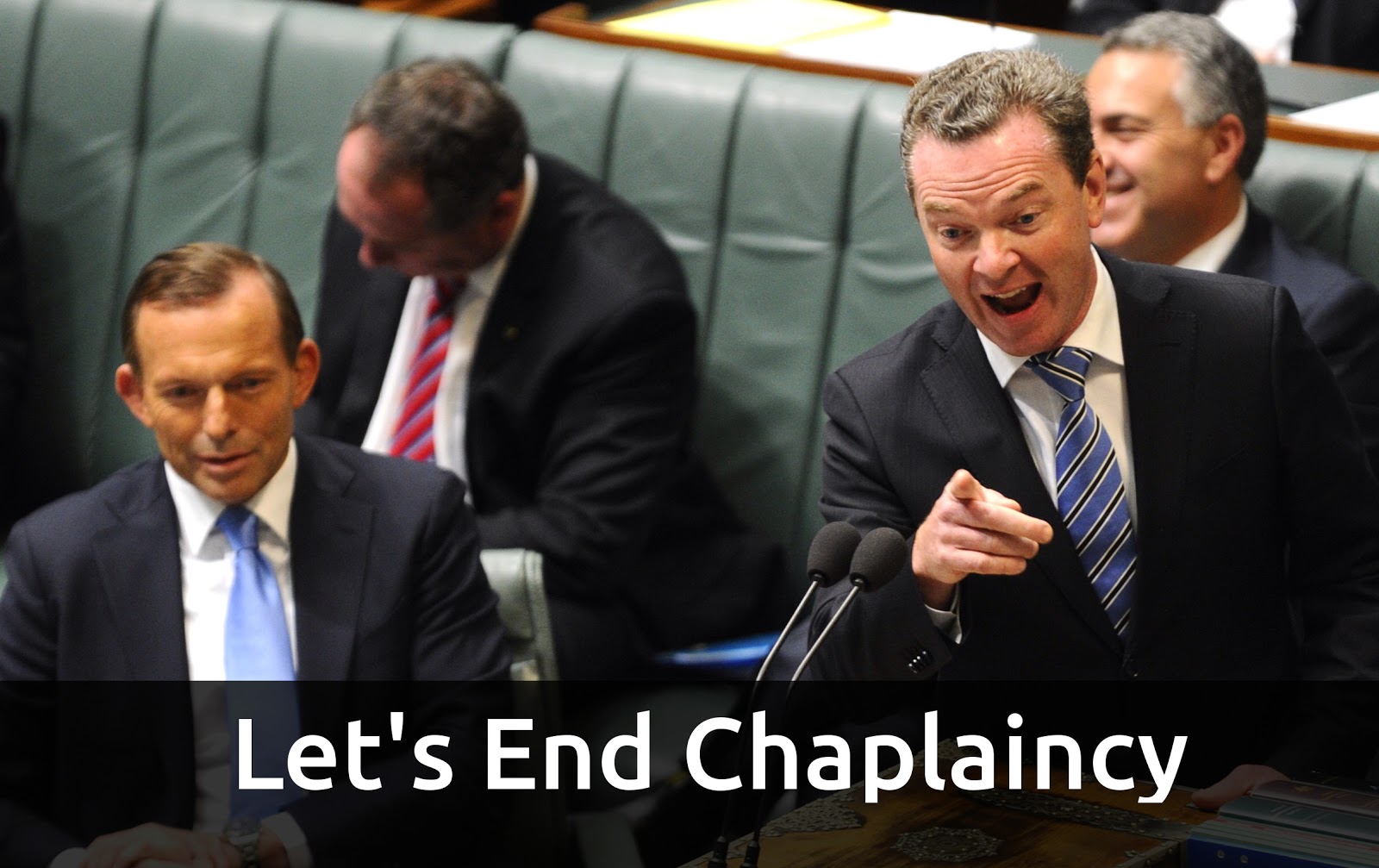 Last Sunday, a 45 year old woman, Christine Jemeli Koech, was accused of witchcraft. A neighbour claimed that Koech, a mother of six had been responsible for her child's illness. A local mob stormed Koech's house early in the morning while she was asleep. They murdered her and burnt her body. This gruesome practice of lynching continues in the East African country of Kenya.

According to media reports, the neighbour has been arrested but the people who carried out the killing are still at large. Witch burning is common in Kenya and in other parts of the region. Men and women accused of bewitching people are executed by a lynch mob. Some years ago, a graphic video of 'witches' being burnt in Kenya was circulated on the internet. It attracted international outrage and condemnation.

It drew the attention of the world to the scale of the problem in Kenya and in other parts of Africa. People in Kenya engage in witch burning with apparent impunity. People who attack and lynch 'witches' more often than not get away with their crimes. This has to stop. The government of Kenya needs to take a proactive rather than its current reactive approach to combat the accusation of witchcraft and the burning of witches in their country.

Very often, whenever there is a case of witch killing, the police respond and make some arrests. But afterwards nothing is heard about the case again. The matter just dies away. The government of Kenya needs to send a strong message to families of victims that they can get justice. And to those who may want to indulge in witch burning, Kenya authorities should let them know that they will be made to answer for their crimes.

Note, this post contains a graphic image some may find disturbing.

Two of our members asked questions on ABC's Q&A. Martin questioned Cory Bernardi on spending $245 million on chaplains, rather than supporting children with disabilities or letting schools hire secular social workers. His presentation of the question was level headed, his body language was recorded as Bernardi replied. Martin's view was supported by every panelist with the exception of Bernardi. Lawrence Krauss added some pearls to the discussion and Cory Bernardi came out, in this writer's mind, as a religious nutter.

The other question was not religiously themed, however was very well done.

Congratulations to our members on an excellent display.

The episode of Q&A is available on iView and Youtube: