Sydney Atheists' AGM was held at 9.00pm on Thursday 9th of December at the Agincourt Hotel.

We are in the home stretch. The extreme right-wing media are misrepresenting and attacking our campaign, no doubt encouraged by the religious right. Our message is very clear: 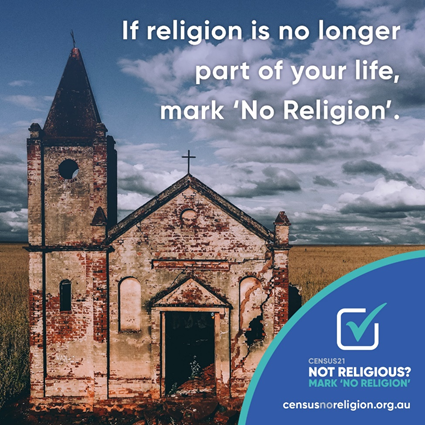 If you would like to contribute to the campaign, hurry, Census Day is only four days away censusnoreligion.com.au

Andrew Denton on the census

If religion is no longer part of your life, mark 'No religion' in the 2021 census.

For more, go to

Regardless of what religion was in your past, if you are not religious now, mark 'No Religion' in the census.

At the census, like Adam Spencer, if you're not religious, mark 'No religion'.
No comments:

If you don't go to the temple, click here:

On the 10th of August, Australia will conduct a census to collect vital data about the circumstances and attitudes of the Australian people, including beliefs about religion.

Despite our close cultural similarities, just 30.1% of Australians marked ‘No Religion’ compared with 48.2% of New Zealanders.

This discrepancy may be because many Australians simply mark that they belong to a religion when in fact they no longer really practise or hold those religious beliefs. Census data is used by the government and other organisations to make important decisions.

They are given a stronger voice and more influence in public affairs and the media than they actually deserve.

That’s why we’re launching the Census 2021 – Not religious? Mark ‘No Religion’ campaign, and we’re proud to have Adam Spencer join us to encourage Australians to complete the Census in a way which truly reflects their beliefs.

If you think it’s important that the religious beliefs of Australian’s are accurately represented, we invite you to join our campaign.

If you would like to stop religious leaders interfering in the lives of others, we invite you to join our campaign.

The first step is to visit the website constructed by an array of freethought groups. The link is at the bottom of this email. At the website you can watch the campaign unfold. You can donate to the campaign through the 'donate' page.

If you sign up to the campaign on the website, we’ll be in touch about how you can get involved and take action.

Thank you for your support.