(a) Based on place of usual residence. Excludes overseas visitors.

(c) No religion includes Secular Beliefs (e.g. Atheism) and Other Spiritual Beliefs (e.g. New Age). In 2016 the order of the response categories changed on the Census form, no religion was moved to the first response. This may result in higher responses reported for the 'No religion' category. 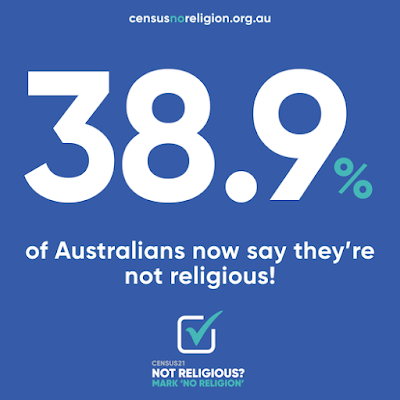 Quoted from The Guardian newspaper

Former Coalition education minister Alan Tudge has warned Labor’s plan to give schools a choice of secular pastoral care workers will “effectively end” the use of religious chaplains in some schools.

The new education minister, Jason Clare, confirmed on Friday the Albanese government intends to give schools a choice of whether to hire a religious or secular pastoral care worker through the $60m-a-year program.

In April Guardian Australia revealed that Labor had told Christian groups it had “consistently supported” the chaplains program but was “committed to give schools the option to choose either a professionally qualified secular student welfare officer” or chaplain.

Schools are currently required to hire chaplains with an affiliation to a recognised religion. Although the program bans proselytising, secular groups, the teachers union and whistleblowers have said it gives religion a foothold in schools to recruit students to church groups and speak about religion, if asked.

Clare told the Canberra Times: “I’ll work with the state and territory education ministers on these changes over the next few months so that it’s ready to go for when school starts next year.”

Tudge said that Labor is “well aware that schools will come under pressure from activists not to employ chaplains, regardless of how effective they have been”.

“Labor has always resisted the schools chaplains program. They have an ideological objection to have religious workers in a school despite their effectiveness.”

LGBTQ+ advocacy group, Just Equal, welcomed the move, with its spokesperson Brian Greig warning that students cannot be “assured of appropriate care” if they confide in religious chaplains about sexuality or gender identity.

“It is also deeply worrying that many chaplains are sourced from religious organisations which may have a long history of opposing LGBTQ+ equality and which have condemned homosexuality and transgender identity as wrong and sinful.”

Independent MP Bob Katter said Christians were “under attack” and it was “shameful … to see the Labor movement, which was effectively founded by a heavyweight Catholics’ movement, to be turning viciously on their own in passing a non-Christian regime upon Australia”.

Quoting from the SMH:

was the following statement:

Internal party polling provided to The Age and Herald show the collapse of the Liberal vote in seats that turned teal was precipitated by four key events in the final months of the Morrison government; the return of Barnaby Joyce as Nationals leader, the Glasgow climate conference, the Christmas holiday chaos caused by the Omicron outbreak and the decision to push ahead with religious discrimination legislation.

At Sydney Atheists, we hope to see the end of this divisive bill.

From the Sydney Morning Herald

The long-running debate over the Coalition’s religious freedom bill has been turned upside down in the past week after the federal government made a significant concession to the LGBTQI community.

Prime Minister Scott Morrison was hoping to use the bill, expected to come to a vote in Parliament in the next two weeks, in his pitch to religious voters at the next election and as a wedge issue against Labor.

The bill, in theory, offers the same protection from discrimination on the basis of religion as already applies to gender, sexuality and race.

But things went awry last week because of a deep split between the religious right faction in the Coalition and progressives including Dave Sharma, Angie Bell, Katie Allen and Trent Zimmerman, who are concerned that the bill would encourage religious institutions who want to persecute or expel LGBTQI students.

Mr Morrison kept the progressives at bay when he first proposed the idea by promising to ban such persecution of LGBTQI students at schools through amendments to a different piece of legislation, the Sex Discrimination Act. But then he muddied the waters by adding the caveat that protection for LGBTQI kids would have to wait until next year.

The delay made many suspicious about the government’s level of commitment to honouring the promise.

The Coalition’s ambiguous position became untenable after it came to light that Citipointe Christian College, a religious school in Queensland, had sent prospective staff and parents a contract insisting students denounce homosexuality and asking them to agree to specific gender roles.

The scandal confirmed the fears of those who believed the religious freedom bill would give a green light to homophobic schools. Providing they publish a written document like Citipointe’s outlining their discriminatory policies, the bill says many religious organisations including schools will be free to discriminate against LGBTQI employees, students or clients and indeed against people of other religions.

Mr Morrison tried to put out that fire by promising to pass the bill protecting LGBTQI students before the election. But not even everyone in his own cabinet agreed. Assistant Minister to the Attorney-General Amanda Stoker, a conservative, said she could not “swear in blood” that the changes would be passed.

The politics are now finely balanced. Despite some misgivings, the ALP seems inclined to pass the religious freedom bill to avoid a fight on the government’s turf. But religious groups have overplayed their hand by pushing for a bill that has highlighted the freedom to discriminate against LGBTQI people, which religious organisations already enjoy under existing laws.

The Herald welcomes Mr Morrison’s pledge to protect LGBTQI students from persecution in this term of Parliament. Religious schools, which receive copious government funds, must not be allowed to expel or harass their students simply because of who they are. On the question of how these schools deal with staff, we have argued before that where staff are engaged in active teaching of religious precepts, the school can argue the need to assert the precepts of their faith, but that maths, English or physical education teachers should face no such discrimination.

As for the religious freedom bill, it has been rushed with minimal consultation and it should be reconsidered. While the goal of protecting religion is worthy, the current bill gets the balance wrong by giving too much protection to religious zealots to engage in bigotry.

To take one example, it restricts professional qualifying bodies such as doctors and nurses associations when they try to set binding standards on how their religious members behave towards LGBTQI people or people of other religions. A joint parliamentary human rights committee inquiry was told this could interfere with the provision of health care.

The bill in its current form could stir up a wave of litigation, sow confusion between federal and state anti-discrimination laws and exacerbate community tensions.

It is hard to see the need for radical change given that Australia is already a highly tolerant society that offers substantial protection to all religions.

Bevan Shields sends an exclusive newsletter to subscribers each week. Sign up to receive his Note from the Editor.