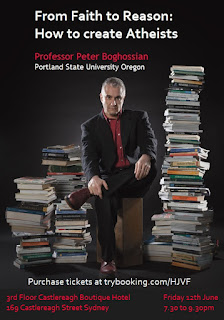 Professor Peter Boghossian event is one week away. Buy your tickets today  http://www.trybooking.com/HJVF
No comments:

Write a letter to your local member today.
Before the religious extremists do!
Here is a sample:
Victorian based parent campaign group, FIRIS, in conjunction with Greens state member John Kaye, have managed to persuade the NSW Education Department to remove books that promote ideas opposed to Education Department policy particularly related to sex before marriage, abortion and same sex relationships.

Christian groups involved are upset about this move and they have asked why the education department is able to censor "the state regulating what Christians should and should not teach Christians."
You can read more of what they have to say here:
http://thinkingofgod.org/2015/05/banning-the-book/
The trouble with the Christian Groups' view is that children and their parents are not necessarily inclined in the way that the religious instructors would like them to be. Many nominally Christian parents might want their children to be exposed to certain Christian values or morality, however would have issues with the fundamentalist approach of the texts that have successfully been removed. Many parents are far more tolerant and accommodating of diversity than these church hierarchies, and would be inclined for their children to be of a similar mindset.
It leads one to ask whether it is appropriate to have religious instruction in public or government funded schools at all?  I would posit that it is not and that Christian and other religious indoctrination should be removed from public state schools forthwith. Religious instruction is in contravention of the Australian Constitution, Section 30 of the Education Act 1990

If Christians wish to teach their children religious doctrine, they have opportunities in their homes and churches to do so, and do so in a manner that they are comfortable with and that is transparent to them. Public schools are for a secular education - not a religious one. Schools should provide education rather than opportunities for religious indoctrination.
In the linked article above there are requests for Christians to write to their local politicians and ask for these homophobic and other archaic texts to be reinstated in public state schools.  This is outrageous – and simply not acceptable in what is supposed to be a secular school system. Society cannot be harmonious when certain elements are discriminated against or vilified.

I appeal to you, the government and the parliament at large to consider the issues that I have raised.
No comments:


Professor  of Philosophy, Peter Boghossian from Portland State University Oregon, USA will discuss
From Faith to Reason: How to Create Atheists
Professor Boghossian is an American philosophy instructor, activist, author, speaker, and atheism advocate. He is the author of the book "A Manual for Creating Atheists". He is a full-time faculty member at Portland State University. His primary research areas are critical thinking, philosophy of education and moral reasoning. Professor Boghossian is a speaker for theCenter for Inquiry, the Richard Dawkins Foundation for Reason and Science, and the Secular Student Alliance.
Professor Boghossian is an outstanding and entertaining speaker who will discuss how to address people of faith to see reason and become atheists.
Richard Dawkins had this to say: "Peter Boghossian's techniques of friendly persuasion are not mine, and maybe I’d be more effective if they were. They are undoubtedly very persuasive—and very much needed"
This is a ticket only event held by Sydney Atheists.