Just in time for one of our April talks: "A heathen in the Kingdom" http://www.meetup.com/sydneyatheists/events/167265962/
comes this article from the Richard Dawkins Foundation:

Why Are Saudis Tearing Up the Quran?More Sharing Services

Posted by Waleed Al-Husseini on Wednesday, March 26, 2014
Saudi Arabia is not the go-to country when you think of atheism, being one of the world’s most repressive Islamic societies. Turns out we may have them pegged all wrong. A 2012 Gallup poll revealed that there is a similar proportion of atheists in Saudi Arabia as in the United States and parts of Europe, and what’s more, those atheists are being increasingly vocal, despite the threat of violence against them.
Atheists in Saudi Arabia tend to keep a low profile (because beheadings), and because Islamic law is the law of the land, they often maintain a semblance of religious observance in public. Not so online, where they’re skirting danger and expressing their atheism via anonymous accounts. The dual existence makes for some incongruous posting—like the user below, defiantly declaring atheism from Mecca, with the holy Qabaa stone in the background. 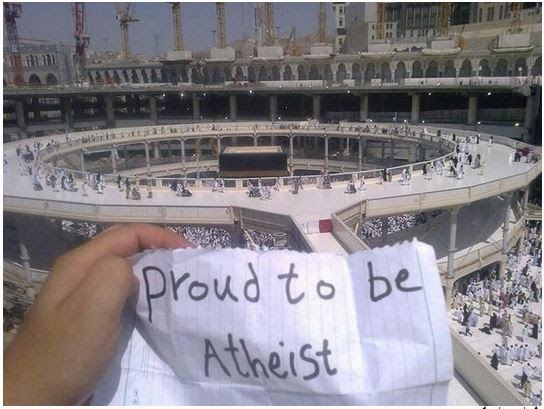